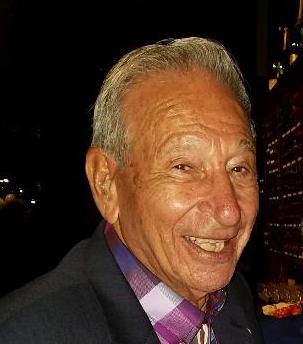 Beloved husband of 67 years to Concetta (Medici) Pellino, Devoted father of Richard Jr., and Michael, beloved father in law of Anna and Monica.

Born in the upper east side of Manhattan on February 1st 1927, Richard (the youngest child) lost his father at the early age of 37 years old, 11 months after his birth and never got the chance to effectively meet and get to know his father. He was raised and cared for by his mother Pasqualina with the devoted help of his older sister Theresa and Brother Paul.

In the 1930's his family moved to the Webster section of the Bronx, NY where he attended St. Brendans Catholic School where he became a bright and model student. He was recognized by his teachers, catholic sisters and classmates as a special and caring student. This is evidenced by the many keepsakes, letters, schoolbooks and mementos from that time of his life which he still possesses to this day, which are in pristine condition and kept safely as if they were treasured museum pieces.

He enlisted in The United States Navy in 1943 and proudly served his country in both World War II and The Korean War aboard naval ships, his favorite being the United States Aircraft Carrier "The Leyte" proudly displaying the number "32". He loved being aboard the carriers traveling thru Europe during his tours as a sailor. He served in the navy for nearly 12 years and was honorably discharged on July 20th, 1954.

He met his beautiful wife "Connie" on a blind date organized by his friends in early 1950 while he was still in the navy, and they were married on April 1st, 1951. During this time he was stationed stateside in Norfolk, Virginia and would travel back and forth between, Virginia and New York to be with his beautiful wife and very large family. Richard was one of five children and Connie was one of six children.
His son Richard was born January 6th, 1954 and Michael was born May 6th 1957. The family consisted of many and as the family grew with many nieces and nephews, "Uncle Richie" became the favorite uncle.

He was a compassionate man, a mentor, a perfectionist, an organized family man who loved his family and would do anything to help and assist any family member or friend. He loved the beach, the ocean, vacationing, the hotels and the casinos, where you could always find him with a pair of dice in his hands at the craps table, or sitting by the roulette wheel where he had his "system" for the winning combination of numbers. He would study the wheel, he was methodical and successful.

At the age of 32, In 1959 he entered into the up and coming industry of commercial air conditioning. He obtained a position within a New York City based organization where he excelled thru the years of his career becoming one of the most recognized experts in the industry. In this capacity he taught and mentored many existing and new individuals entering the industry, including his two son's Richard and Michael who proudly followed in their father's footsteps and went on to be the successful owners of their own highly recognized New York City based mechanical contracting firm.

In 1994 Richard retired from his career and with his beautiful wife Connie became "Snowbirds" making the annual winter pilgrimage to their lovely home in the Ft. Lauderdale suburb of Davie Florida. He would spend his spring and summer in his Pelham Manor NY home, where he was an active and involved member along with Connie in the Pelham Seniors Group. He also served as the president for a few terms.

He along with Connie, would participate in all of the daily and local activities, as well as the many planned field trips by bus to many different destinations that the seniors would embark on. And just after the Christmas holidays, where he made sure to be with his sons and family, he and Connie were off to Florida for the winter.

Winters in Florida were spent with many family members, brother in laws, sister in laws, nieces, nephews, close friends and contemporaries who were all close by, making it feel like a party every day. Richard and Connie were either entertaining at there home, being entertained at someone else's home or would be out for a night on the town. GOOD LIVING!!

He had a wonderful and great life of 91 years, was strong and never sick a day in his life, he was loved by so many for so long and will be sorely missed. In his prayers to God over the years, he asked god to give him the years that his father never got. God had blessed him with 91 beautiful years, 64 of them with his sons, and 67 of them with the love of his life. "His Connie"

A celebration of Richards life will take place Friday, April 6th from 2-4 & 6-8 pm at the Pelham Funeral Home 64 Lincoln Avenue, Pelham NY. A Funeral mass will take place at 10:00 am on Saturday, April 7th at Our Lady of Perpetual Help located in Pelham Manor. Interment will follow at Woodlawn Cemetery located in the Bronx.

For more information or to leave a condolence please visit www.pelhamfuneral.com.
To order memorial trees or send flowers to the family in memory of Richard L. Pellino, please visit our flower store.