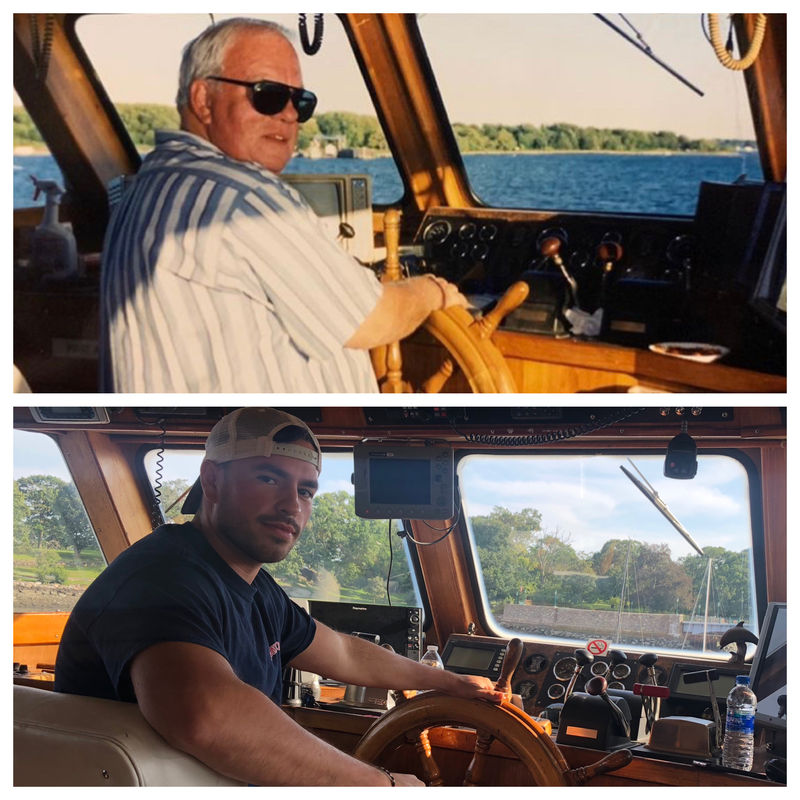 Captain Pete Pearson, known to many as a legend on the Long Island Sound and the third Pearson to successfully run the Klondike Fishing Corporation, passed away on May 20, 2020. Pete was 80 years old. Born in New Rochelle, NY to Harry and Jean Pearson, Captain Pete was one of three children. He graduated from New Rochelle High School before starting a speed shop where he built race motors. His grandfather would often tell him, "Automobiles have their place, but they are useless on water, and it's on water we belong". Taking advice from his grandfather, Pete quickly joined the family business and became the Captain of the Klondike V.

Outside of his life as a Captain, Pete was a family man. He married his high school sweetheart Patricia Pennetta. The couple moved to Pelham where they raised their two children Jon Peter Jr. and Bob. Pete built the Klondikes VI, VII, VIII, and IX. Last year, 2019, marked 100 years of Charter boat running for the Pearson Family. Pete's wife Patti, sons, grandkids, and nephew were all lucky enough to work on the vessels and take part in the family's rich history.

Pete lost his wife Patricia after 43 years of marriage. He would later meet and marry his wife Joyce in 2016. Pete and Joyce lived in Pelham before eventually moving to Vero Beach, Florida.

Captain Pete will be remembered as a passionate, hardworking, driven and generous gentleman. He was extremely loyal and enjoyed spending time with family and friends.


Captain Pete was a loving husband, father, brother, uncle and grandfather. He made a positive impact on all of the lives he touched. He was lucky to live a long, happy and full life of excitement, love, and friendship. May 3rd, 2020 marked his 80th birthday, and he had a big smile on his face just as he always did. He will be greatly missed, but the legacy he left behind speaks for itself.

Captain Pete is survived by his wife Joyce, his son Bob (Angela) Pearson. His grandchildren Jon Peter III, Jessica, Melissa, Adam and Jillian. He will be missed by his sister Barbara (Bobbie) his in-laws and his many nephews and nieces. He is predeceased by his first wife Patricia, their son Jon Peter Jr., his brother Bill and nephew Kenneth.

A private celebration of Captain Pete's life will be held at the Pelham Funeral Home. Interment will follow at Gate of Heaven Cemetery in Hawthorne. For more information or to leave a condolence please visit www.pelhamfuneral.com
To order memorial trees or send flowers to the family in memory of Pete Pearson, please visit our flower store.