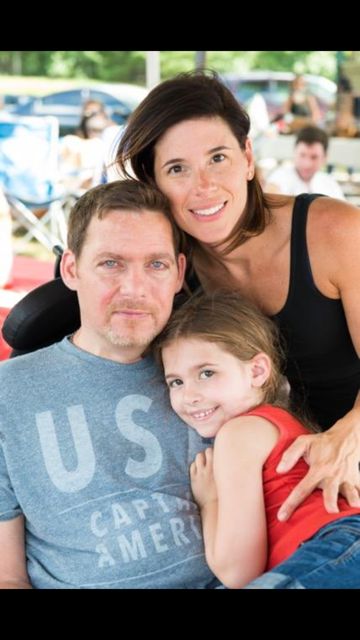 After a courageous, fourteen yearlong battle with ALS, Anthony Senerchia Jr. passed away on Saturday, November 25th. He was 46 years old. The third of four boys born in Mount Vernon, NY to Anthony and Rose Senerchia, Anthony was the inspiration behind the "ALS Ice Bucket Challenge". Anthony was raised in Pelham, NY where he attended Prospect Hill School before graduating from Pelham Memorial High in 1989. Anthony was an athlete who excelled in football as Captain of his high school football team. It was while attending high school that Anthony discovered his biggest loveâ€¦ a love that would become his pillar and support in the game of lifeâ€¦Jeanette Hane, whom he would later marry.

After graduating from high school, Anthony attended Delhi University for two years followed by four years at Manhattan College where he graduated as a Civil Engineer. His engineering degree and strong work ethic served him well. He started his career as a Project Manager with Tri-Star Construction in NYC and later started his own general contracting business named SCC Construction.

In 2003, Anthony married his wife of 14 years Jeanette Hane. It was shortly thereafter that Anthony would be diagnosed with ALS. Anthony's positive attitude and fighting spirit helped him beat doctors' expectations by living more than ten years beyond their prognosis. If you asked Anthony, he would attribute this to his love and desire to be with his daughter Taya. Throughout his fight, Anthony maintained a positive attitude and would say "It's not what we take from life, but what we give back to others is what ultimately defines us." Anthony continued a life of giving. He went on to create the Anthony Senerchia Jr. ALS Charitable Foundation which made substantial monetary donations to Columbia Presbyterian Medical Center for ALS research, and to families stricken with ALS suffering financial hardship. He worked tirelessly to raise awareness for ALS and was directly responsible for the world-renowned Ice bucket challenge which raised over two hundred million dollars for ALS research. At the height of the ALS Ice bucket challenge in 2014, Anthony and his family were invited to ring the opening bell at the NASDAQ stock exchange. In 2016, the original Ice Bucket used by Anthony's wife Jeanette was inducted into the Washington D.C. Smithsonian Institution, National Museum of American History.

Anthony's charitable contributions and honors are endless. He became an honorary firefighter in the village of Pelham and in 2015, was awarded "Man of the Year" by the Pelham Civics Association. Later that same year, Anthony received the prestigious Castle Connelly National Health Leadership award for all his charitable contributions. Anthony was also honored by the town of Pelham for his contributions to his community and for his role in creating the Pelham youth football league. Anthony donated many hours and years of his life coaching Pelham youth football. As a result of his commitment and contributions to the town, each year one outstanding high school athlete demonstrating character, strength and leadership is selected as the "The Anthony Senerchia Award" recipient.

Although Anthony received many awards and accolades in his lifetime none would compare with his daughter Taya who was his ultimate pride and joy. Anthony was a devoted father who loved to take Taya for breakfast, help with her math homework and go for walks with her.

Anthony will be remembered as a fireball who tried everything in life. He was family oriented, generous and always ready to lend a helping hand. He was a great husband, a proud father, a loving son and a great brother. He will be missed by everyone who knew him.

Anthony leaves behind his wife Jeanette Hane Senerchia, his daughter Taya, his parents; Anthony and Rose Senerchia, his brothers; Nick, (Rita) John, (Tracee), Joseph (Kirsten), his fourteen beloved nieces and nephews and his many aunts, uncles, cousins and friends.

A celebration of Anthony's life will take place at the Pelham Funeral Home located at 64 Lincoln Avenue, Pelham NY on Tuesday, November 28th, from 2:00 to 8:00 pm. A Mass of Christian Burial will take place at Our Lady of Perpetual Help Church 575 Fowler Ave in Pelham Manor on Wednesday November 29th at 10:00 am. Entombment will follow at Ferncliff Cemetery. In lieu of flowers donations may be made to www.plumfund.com/memorial-fund/tayas-fund. The Senerchia Family would like to thank everyone who has supported and helped them over the past few years. They would like to send a special word of thanks to the Pelham Fire and Police Departments for all their help. For more information or to leave a condolence please visit pelhamfuneral.com
To order memorial trees or send flowers to the family in memory of Anthony Senerchia, please visit our flower store.