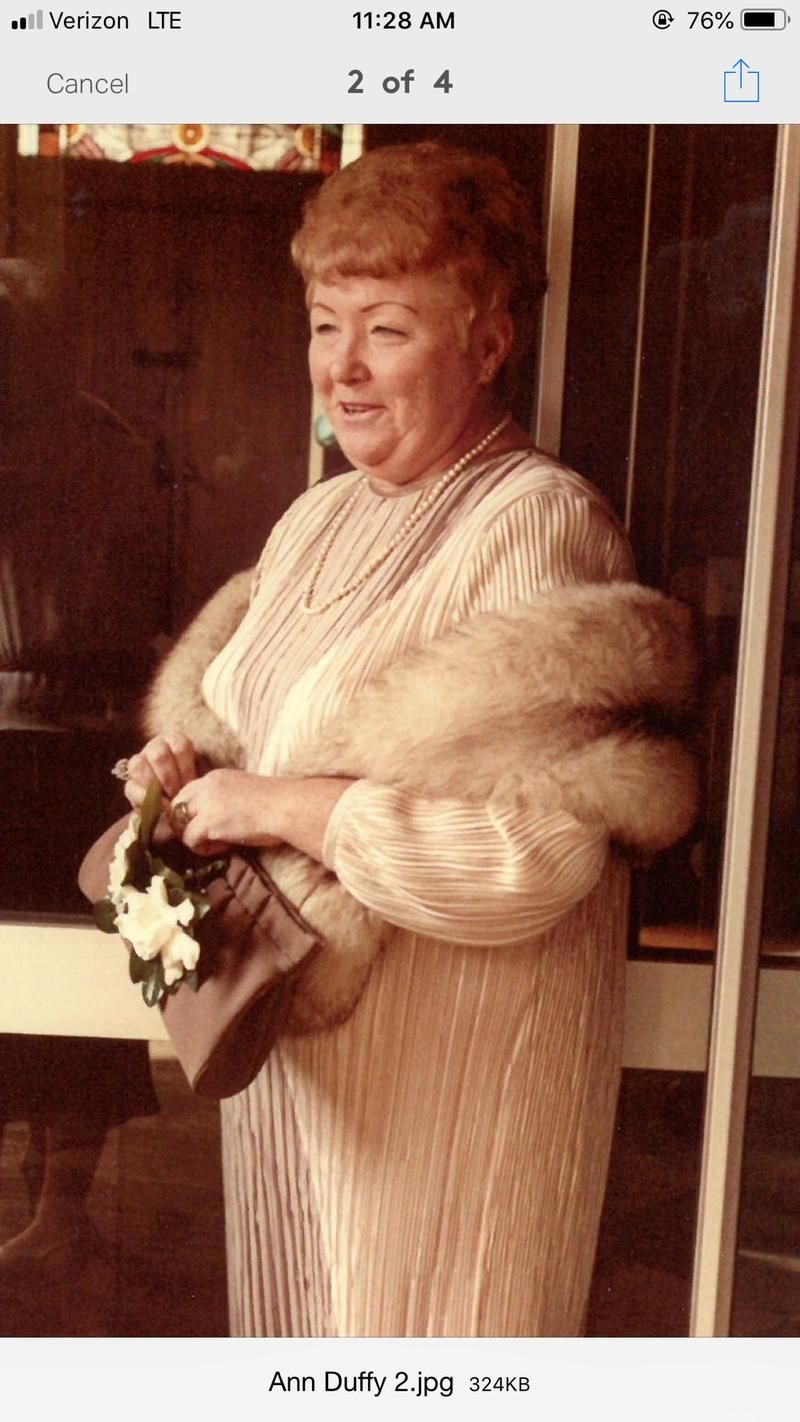 Ann T. Reddington Duffy passed away peacefully surrounded by family on Sunday, February 24th in Venice, FL. Ann was born in New York City on March 8th, 1936 to Florence and Thomas Reddington. The middle child of three, Ann was nicknamed "Mickey" early on by her father and the name stuck. Mickey grew up with New York City as her playground. She attended Holy Cross Grammar school where she learned a deep love for her religion and those who taught her. Her pastor, Msgr. Joseph A. McCaffrey, would become like a second father to her and lifelong example. On weekends she would often take her younger brother to movies. Her love of movies was formed early and was profound. Mickey's knowledge of movies and actors was unparalleled. When not at the movies she could be found running and playing with friends on the West Side of Manhattan. From life in Hell's Kitchen to dances at the Hudson Guild, Mickey enjoyed her childhood. She would marry Harry Billings and settle in Chelsea. She would have three children and raise them, eventually returning to work as they grew. Escaping from the City every summer Mickey would take her children to Rockaway Beach where she enjoyed long days by the ocean.

Mickey's pleasures were simple, good friends and family; talking and discussing politics, religion and movies; a good meal out and a "good" drink. She would eventually re-marry Gene Duffy and the pair enjoyed good times until his death in 1982.

Mickey's most valued relationship was with her beloved mother. Constant companions, mother-daughter, friends and family, her mother, Florence, was her idol and example. The death of her mother in 1992 was a loss that Mickey would never fully recover from. She kept the loving memory of her mother close to her heart with the dear hope of seeing her again one day. She prayed the rosary every day and never missed completing her prayers. All her prayers, however, would have to be done by the time her favorite show, Judge Judy, came on TV. This show reminded her of her beloved New York City which she had left in 2002 when she moved to Venice, FL. Mickey would like to be remembered as a dyed in the wool New Yorker, and her mother's daughter.

Calling hours will be at Pelham Funeral Home, 64 Lincoln Ave, Pelham NY on Friday, March 1st from 4:00 - 8:00 PM. A Mass of Christian Burial will be on Saturday, March 2nd at 10:00 AM at Our Lady of Perpetual Help Church, 559 Pelham Manor Road, Pelham Manor, NY. Burial will follow the Mass at Calvary Cemetery, Queens, NY.
To order memorial trees or send flowers to the family in memory of Ann T. Reddington Duffy, please visit our flower store.